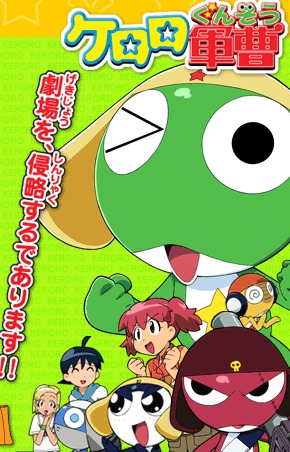 Plot Summary: Keroro is a frog-like alien sent from his home planet on a mission to conquer Earth. But then his cover is blown, his battalion abandons him and he ends up in the home of the Hinata family where he becomes friends with Fuyuki and gradually starts to forget about his mission, enjoying life on earth.It is a day just like any other when Keroro skips out on simulated battle training in favor of buying the newest Gundam model with Fuyuki. On their way home, they stumble upon a hidden shrine, where they end up causing damage to a shining orb uppon exploring it. That night, Keroro finds a big X on his face, which causes him considerable distraught. The next morning, a breaking news story shows that the X has spread to more than just Keroro, giving the people of Tokyo telepathic abilities, including the Hinata Household and the Keroro Platoon. The Earthlings seem to think this is a great gift, but the mark may actually be part of a Pekopon invasion older than time itself.