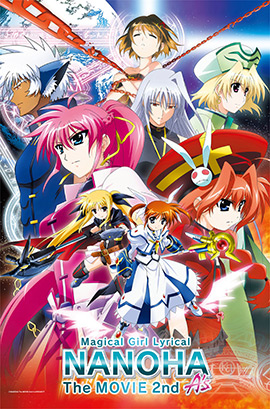 Plot Summary: After the events of the Lost Logia case, Nanoha waits patiently for the day she can reunite with her newfound friend, Fate. Although being an exceptionally powerful mage, Nanoha spends her days normally with her friends on Earth. But peace is once again suddenly shattered, as Nanoha is without warning attacked by a powerful mage. A group of violent mages have been attacking anything with magic power for their own goals. Nanoha and Fate, along with their friends Yuuno, Arf, Chrono and the Space/Time Administration Bureau must once more band together to stop these renegade mages from hurting anyone or anything else. Takes place after the first season of Lyrical Nanoha.